How can Yoga practice and therapeutic Yoga Tune-Up® ball work help us regain some of our confidence, as well as physical potential following a trauma? How can this work relieve tension from accumulated stress?

Kayla’s generous willingness to share her story of car accident recovery is a testimonial to the benefits of these practices.

In our upcoming “Tonic for the Tissues” workshops, you can also experience deep tissue release through ball work and Yin Yoga.

Life transforms in an instant

Kayla is strong and athletic: she was a gymnast and shot putter in high school. However, as we poignantly know, even the strongest young person’s life can change radically as a result of an accident.  Kayla’s car was one of five vehicles rear-ended in a chain reaction car crash. 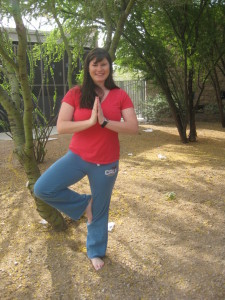 Kayla’s recovery from a nasty car accident was helped along with the holistic practices of Yoga.

Kayla’s cervical and thoracic spine seized and were pulled laterally, causing scoliosis. Kayla was in so much pain in her torso, she reports that “it even hurt to eat.”

Several months after the accident, following physical therapy, Kayla signed up for my yoga class series. Kayla’s range of motion increased from yoga. She reported that prior to class in reclined twist, she could not relax her knees to the floor.

Her regular  and consistent practice of yoga demonstrably increased her range of motion (ROM). Her sensitized awareness of her breath helped her to let go,  physically and mentally. 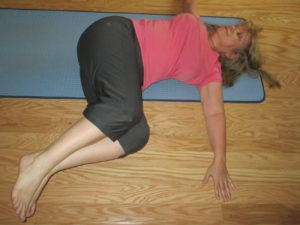 Reclined twist/Revolved belly, Left and right side of hips are aligned; as much as your body allows. Feel the belly move opposite the legs. Notice how the upper body opens and the spine receives a gentle twist. Kayla couldn’t get her knees to the floor as demonstrated by me in this photo, when class began. I placed a prop under her knees and legs until she regained her ROM.

Additionally our work with the Yoga Tune Up® therapy balls helped Kayla to incrementally unclench her upper trapezius muscles. According to Kayla, “just reclining and relaxing over the therapy balls on my upper back helps me where it hurts!” 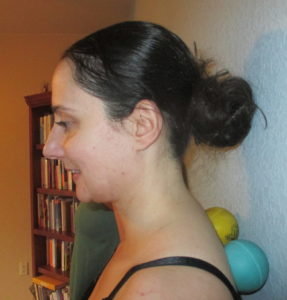 Maria brings the Yoga Tune-Up Balls® to the wall to also erase upper back and shoulder tension.

By the end of the class series, Kayla had recovered full range of motion. Of course, the breath and meditative benefits of yoga have helped her manage lingering aches and pains from the accident.

Self-care with the Yoga Tune-Up® balls as well as taking time in Yin poses on a regular basis helps unwind tension and begins the ironing out clenched muscles.

Do you want to learn self-care and self-massage as well as deep release with Yin Yoga? Sign-up now for the upcoming popular  “Tonic for the Tissues” sessions. Class size limited and they fill fast. Details here and registration here!

Looking forward to seeing you soon!

A version of this article originally appeared on the Yoga Tune-Up® blog.

Serenity, Knowledge, Desire to Help Others

The knowledge and skill of a facilitator like Bonnie are essential. Her initiative and dedication to the learner are unsurpassed

The knowledge and skill of a facilitator like Bonnie are essential. Her initiative and dedication to the learner are unsurpassed
https://www.yogawithbonnie.com/testimonials/knowledge-and-skill/

I admire that you ease everyone into each posture, instead of speeding through the lesson.

I admire that you ease everyone into each posture, instead of speeding through the lesson.
https://www.yogawithbonnie.com/testimonials/great-pace/

I love Bonnie’s classes! Anything you need help with or if something feels out of line, she will help you....

I love Bonnie’s classes! Anything you need help with or if something feels out of line, she will help you. She teaches you to become aware of your body and mind so you yourself can take her teachings and help yourself in the real world.
https://www.yogawithbonnie.com/testimonials/i-love-bonnies-classes/

I cant say enough about Bonnie. She guided every move in a fluid manner and simply said the name of...

I cant say enough about Bonnie. She guided every move in a fluid manner and simply said the name of the position while we completed the move. It was a very calming, motivating, and a wonderful experience. I cant wait until next week! Thank you Bonnie for introducing me to yoga.
https://www.yogawithbonnie.com/testimonials/cant-say-enough/