Meet Chris Coniaris: Profile of a Master Teacher, Part One

Recently I had a wonderful reunion with my exquisitely gifted and inspirational yoga teacher and mentor of over a decade, Chris Coniaris . My husband Norm came to yoga-and stayed-because of Chris. I studied with Chris weekly in public classes even as we were raising our sons. I followed him from studio to studio as one yoga venue closed and Chris would find another home.  I also participated numerous times in private and semi-private pranayama, asana, meditation, and yoga philosophy study sessions under his tutelage.

Chris empowered me in my asana practice to access poses for which I was mentally blocked. He opened up the deepest door to yoga philosophy. He helped me breathe. He also introduced me to the teachings of his teacher, Dr. Shankarnaranya Jois. I had the privilege of studying with Dr. Jois along side Chris in a weekend intensive in Tucson.

Chris currently teaches around the US and is developing more offerings for Tucson. 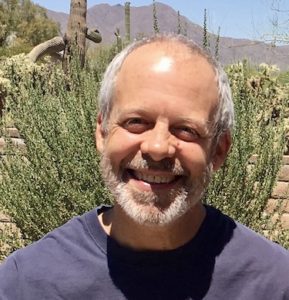 Even though we do not see each other in person nearly as often as we used to, his influence on how I approach my personal practice and public offerings continues to be substantial.

Many long time Tucson area practitioners know Chris. Others are now going to learn more about this gifted teacher.

When and how did you find yoga or should I say how did yoga find you?

As a child, we did a little meditation before martial arts practice.  I started meditating in the Buddhist tradition at age 17 when in college.  I took a course in Buddhism and saw right away that meditation was the key. I asked my teacher to teach me meditation but she said she was an academic.  She then took me to a Buddhist Monastery in Howell Township, NJ. (I was attending Rutgers.) to receive instruction from Tibetan monks.  I then started a regular meditation practice.

After several years of disciplined sitting but not much mental stillness, my meditation flourished and was super deep and quiet when I worked for the forest service in SE Alaska. I was doing fish studies with a partner, was dropped off in the wilderness, and got supplies and contact with the outside world every 10 days. At the time I was almost convinced that we have to withdraw from society to go deep.

I eventually found  a vigorous flow class in Tucson including the Ashtanga series. I was hooked because the teacher Bill Counter taught pranayama every class. Bill was my teacher and founder of Yoga Oasis.

Once I added pranayama before meditation I started finding stillness while practicing in Tucson.  I no longer had to spend weeks in the wilderness to settle my mind.  I became hooked on pranayama and started looking for teachers. I studied some with Tim Miller who had studied directly with Pattabhi Jois.  I studied with a few of the Iyengar senior teachers.   I then went to India and studied with Jois and met Dr. Shankanaranya. At that time he was known as the astrologer to western students. He was a professor at the Mysore Sanskrit institute. I asked him to teach about the yoga sutras and that led into individualized instruction in pranayama.

What was your practice like in the beginning of your yoga journey?

Chris and I. Photo by Norm.

It was more regimented earlier. It was more consistently physically challenging. I used to do 90 minutes of ashtanga vinyasa 6 days a week and 45 minutes of pranayama before meditation and 20-30 minutes in the evening before meditation. Over the years the practices have become less physical and more focused on the energetics of the breath although that was always a focus. I think now I’ve learned how to have a very powerful physical asana practice with very simple asanas. I do find the inversions headstand and shoulderstand to be a very important part of my practice now.

How has it changed? What is it like today?

It has become slower, more deliberate with greater sensitivity.  I still practice vinyasa but the movements are slower.

I believe there should be no stopping and starting in practice, just doing, so transitions are ultra important.

I also practice on a circular mat when I use a mat for asana.  This facilitates many more fluid transitions and more natural movement.

What is most important to you as you teach yoga?

Certainly ahimsa. No harm. Not just physically with the asanas. There are people for whom pranayama and other meditation techniques are not well suited. Make sure that whatever practice is offered is not to do any harm.

I want to get people to have an experience of the mental state of yoga. If as a teacher I can offer that experience , that is the highest gift that I can give them. Yoga is both a state of mind and a set of techniques.

A traditional saying is that “Yoga is learned by the means of Yoga”.  Also, I try to give some idea to students of the depth and breadth of yoga history and philosophy.  This may stimulate deeper study and understanding of the full range and subtleties of Yoga.

No matter who you study with, you’re only going to get a sliver of Yoga. Yoga is about infinite interconnectivity of all things.  And there are many paths to this realization.

Do you think there is more or less (or the same) appreciation for studying yoga philosophy and the more subtle less showy aspects of the journey?

It varies so significantly depending on which group of people are taking yoga. Amongst the teacher trainings I teach in different locations, people are very hungry for it. I think that it has a lower profile than it did 20 years ago.

I’m frequently asked to lecture on yoga philosophy and emphasize the practical nature of these texts.  I teach in prisons  and have seen incarcerated men take the ideas of the Bhagavad Gita we discussed and apply them to the challenges of living behind bars.

Don’t miss part 2 of my conversations with Chris when we discuss Yoga’s influence on his profession of pharmacy, his love of the outdoors, how his teachers have influenced him, and more!

Check out my upcoming workshops, and weekly teaching schedule!

Serenity, Knowledge, Desire to Help Others

The knowledge and skill of a facilitator like Bonnie are essential. Her initiative and dedication to the learner are unsurpassed

The knowledge and skill of a facilitator like Bonnie are essential. Her initiative and dedication to the learner are unsurpassed
https://www.yogawithbonnie.com/testimonials/knowledge-and-skill/

I admire that you ease everyone into each posture, instead of speeding through the lesson.

I admire that you ease everyone into each posture, instead of speeding through the lesson.
https://www.yogawithbonnie.com/testimonials/great-pace/

I love Bonnie’s classes! Anything you need help with or if something feels out of line, she will help you....

I love Bonnie’s classes! Anything you need help with or if something feels out of line, she will help you. She teaches you to become aware of your body and mind so you yourself can take her teachings and help yourself in the real world.
https://www.yogawithbonnie.com/testimonials/i-love-bonnies-classes/

I cant say enough about Bonnie. She guided every move in a fluid manner and simply said the name of...

I cant say enough about Bonnie. She guided every move in a fluid manner and simply said the name of the position while we completed the move. It was a very calming, motivating, and a wonderful experience. I cant wait until next week! Thank you Bonnie for introducing me to yoga.
https://www.yogawithbonnie.com/testimonials/cant-say-enough/